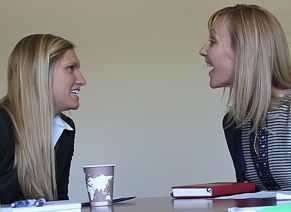 The Boston Globe
By Kathleen Pierce

Betsy Myers pulls no punches when she explains why 50 to 70 percent of US workers are unengaged with their work.

“Let me tell you what your day is like,” she tells aspiring leaders in addresses across the country. “Get your coffee. Sit down at your desk. Start looking at e-mails. You are totally distracted — bouncing off here and there. Then it’s 11 and you might have a meeting. Now it’s 12:30, you’re hungry, so you grab lunch,” she says.

Sound familiar yet? Then it’s: “Oh my God, how did it get to be 2 p.m.? You check your inbox again. Pull your head up and it’s 4 o’clock and you didn’t do one freaking thing that got you to what success looks like,” said Myers, the founding director of the Center for Women and Business at Bentley University.

Then the kicker: “Every leader that is making it big time is not sitting at their desk.”

Neither is Myers. She comes to academia from the political world: Myers, 51, was chief operating officer and a senior adviser to Barack Obama’s presidential campaign, and served as a senior official in the Clinton White House. As Myers sees it, her role at Bentley is to push forward the conversation about women and corporate leadership, connect with decision makers across the country, and make it clear why more women in corner offices are good for business.

“Women are no longer an interest group,” Myers said, ticking off her talking points. “Women are 52 percent of the population, a majority in the workforce. Companies that have more women in top positions, and more women on boards, are more profitable.”

Despite advances for women in the workplace, many of the statistics are discouraging. Only 3.6 percent of Fortune 500 companies are led by female CEOs, and women hold only about 14 percent of senior management positions within those companies. Despite the fact that more women than men are earning college degrees, and that women continue to make the bulk of buying decisions, corporate America has been slow to reflect that in its leadership ranks.

The slow pace of change is what compelled Bentley president Gloria Larson to launch the Center for Women and Business a year ago.

“Many fabulous schools are focused on women in the workplace and society broadly,” Larson said. “No one is really grabbing the bull by the horns at the pure higher-ed level.”

With Myers as its CEO, the center aims to advance women at all stages, from business-school students to upper management, Larson continued, “to be sure we are changing the status quo.”

On a recent morning in Myers’s office, Stephen DelVecchio, a Boston partner at PricewaterhouseCoopers LLC, and Maggy Reynolds, a junior at Bentley, brainstormed ways to do just that. That day the conversation was on how women negotiate salaries, or don’t.

PwC, the global professional services firm, was one of the first companies to step up and support the Bentley Center for Women and Business, investing $1 million. DelVecchio, a Bentley alum, thinks PwC’s commitment to the center will help assure a strong field of female job candidates and corporate leaders down the line.

“We want to do something different,” said DelVecchio. “This is different. This is strategic.”

When Larson announced that Myers would be the center’s founding director, DelVecchio’s first thought was: “Oh, she is serious about this.”

Serious enough to conceive of the center with Myers in mind. When Larson was a partner at law firm Foley Hoag (she had also worked for William Weld when he was governor) and Myers was executive director of the Center for Public Leadership at Harvard’s Kennedy School of Government, Larson was impressed with Myers’s drive.

“I was intrigued by what they were doing around leadership skill development and I said, ‘You know, Betsy, someday we’ll put our heads together to do something great for women,’ ” Larson recalled.

That day came when Obama was elected president and instead of joining the administration, Myers returned to Boston to be with her family and work on a book.

Shortly after, Larson, who became Bentley president in 2007, invited Myers to her office. “I have a glimmer in my eye,” Larson said, “about a center for women in the corporate world.”

By the time Myers’s book, “Take the Lead: Motivate, Inspire, and Bring out the Best in Yourself and Everyone Around You,” was complete, the center was more than a glimmer. Larson had raised $5 million for it. “Betsy was exactly the right person at the right time,” Larson said.

The “yes we can” spirit that characterized the Obama campaign still resonates for Myers. And because of her experience, people are listening.

“She is very credible because she is very genuine. Today she is in academics, she’s been in politics, but has a business background,” said Illene Haber, communications director for Farmers Insurance Group, which has used Myers’s book as the basis for women’s leadership initiatives. (She also consults for the company on women and leadership.) “She has many different point of views and is a very effective storyteller.”

Myers grew up in California, graduated from the University of San Diego, and earned her master’s at Harvard’s Kennedy School. While her younger sister, Dee Dee Myers, who served as White House press secretary for the Clinton administration from 1993-94, was passionate about politics in college, Betsy entered Washington through the side door.

Her first job inside the Beltway was working for the Small Business Administration, where she was director of the Office of Women’s Business Ownership. From there, she joined the Clinton administration’s newly created White House Office for Women’s Initiatives and Outreach.

Betsy Myers recalls that even in the harried halls of the White House, President Clinton remembered everyone’s names and routinely gave credit to employees for jobs well done.

“Simple human traits: value, appreciation. People love feeling included,” said Myers. “That’s what I’m saying to our leaders. If people feel heard, they do their best work. The number one reason people leave a job is because of managers. We need to train leaders better.”

Dee Dee Myers is not surprised that her sister “is right in the stream” of the movement to improve opportunities for women in corporate America.

“She always wanted to be out front and organize people and say, Hey we can do this,” she said.

Betsy Myers attributes success to focusing on what matters. “As I get older I think, what are the things I must do? What are the things I don’t need to do? Everyone has a list of things. I call them the A, B, C’s, and D’s. Right now I’m only doing A’s,” she said.

On the A-list is her husband, Rob Keller, daughter, Madison, 9, mini golden doodles Sadie and Riley, her book, and, of course, Bentley.

She stays balanced by connecting with neighbors at the dog park in Belmont, spending time with her daughter, and doing hot yoga several times a week.

“You have to be strategic at home and work,” Myers said. “We have so many chapters, you never really have it all figured out. But if you stay in touch with your passion, what gets you fired up, your life will take you to amazing places and doors will keep opening.”